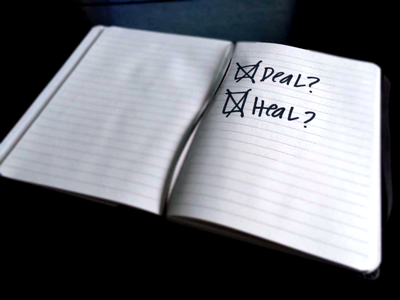 There?s a story in the Bible of a furious squall on a lake where Jesus? disciples are navigating their way to the other side while Jesus sleeps. They wake him to ask, ?Don?t you care if we drown?? He rebukes them and the waves, calming the chaos in both.

As a fairly volatile person when it comes to emotions, I connect to this story on a visceral level. And as a participant (or as a recipient, as the case my be) of some squallish (a word?) personal interactions, I?ve discovered a rhyming phrase that may help calm the chaos in some of those?ahem?robust dialogues.

There are some issues that must be talked out. Changes need to occur. Boundaries set. Wrongs acknowledged.

Then repairing and rebuilding can begin. Healing doesn?t require that we forget when we forgive. That?s often not possible and it?s often not wise or healthy. When healing from surgery or injury, we take things slowly, easing back into our routines. Eventually, we know that the wound has sufficiently healed to resume normal activities.

First we deal; then we heal.

Dealing means we don?t ignore underlying issues; healing means we move on once the necessary conversations have taken place. This is easier said than done, especially when the formula rhymes. But the process is neither effortless nor simple. Both dealing and healing take courage, communication skills, and sometimes arbitration. But if we don?t deal, we will drown. That?s not better.

When have you had to deal and heal?