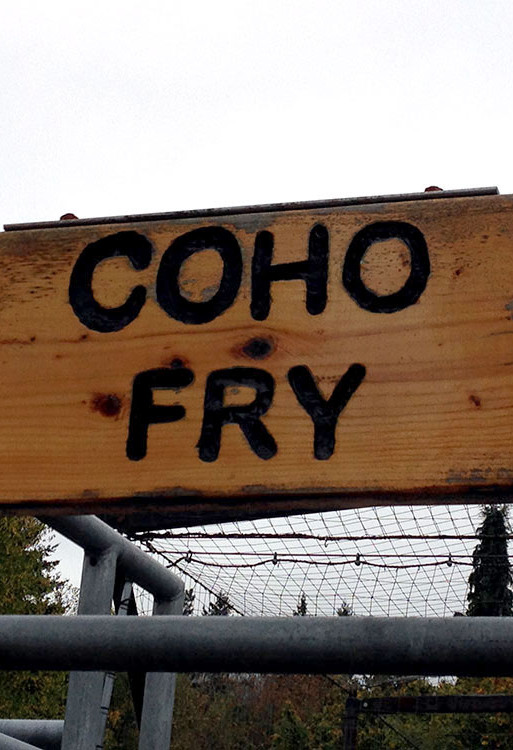 Each year at about this time, salmon swim up the creek in our town toward the hatchery, where they spawn and live out the rest of their few remaining days. It?s such a fascinating phenomenon, in fact, that the first weekend of October is designated as ?Salmon Days?, and the streets fill with booths and tents selling crafts, arts, and snacks celebrating the shape and purpose of the Coho and their kin.

While walking near the creek recently I saw the fiercely determined swimmers heading upstream with a variety of battle wounds. Some still appeared to be sleek and agile, while others had clearly grown exhausted during their journey from the Pacific and were losing their coloring and vitality. A few of the fish were still feeling rather feisty, attacking and swimming aggressively after some of their fellow sojourners. At this point in the trip, fellas, what?s the hurry? You?re all going to the same place to die, so?.

In addition to these occasional skirmishes, I noticed several compatriots who, sadly, would not be joining the rest in the happy waters of the hatchery. They were lying still, decaying and colliding with the rocks and trees of the shore. None of their friends even seemed to notice.

It got me thinking: where is my focus when I?m heading toward my goals and ultimately the end of my life? Am I focused on fighting those who are ahead of me or crowding my space? Am I trying to avoid seeing the failures along the way? The ones who didn?t make it? Am I distracted or focused on my task and mine alone? The answer varies according to the season of my life, if I?m being honest.

What about you? Where is your focus these days?